​Dark Tower, Ka-Tet & The Finding Of My Muse

​My belongings, my home, my place in the world. My guitars and banjo, my books... oh, my books... and I lost all my art. My personal works and also the collected works of many of my friends and other great artists around the globe. All gone in fire and smoke. Dust to dust, ashes to ashes.

I never thought I'd pick up a brush or a pen or pencil again. I couldn't even leave the house I was temporarily living in for months. Then I moved. I moved far away from the fire and left the memory of it burning on the event horizon behind me. In doing so I lost the rest of the life that could have been - a possible new love, a new business, a new community. All gone. The fire burned all that away too.

And so I hid in my new home for many months more. As the seasons changed, I began to heal. Gradually I crept out from the dark and turned my face towards the sun. As the event horizon moved farther and farther away, I began to turn towards a new future. It has been one of the hardest, most difficult and painful journeys of my life. Many people I thought of as good friends totally abandoned me and that hurt. Hurt on so many levels although part of me understood and forgave them their leaving. Other people stood by me through it all, held me up when I fell, pulled me forward into the waiting light. I'm so grateful to so many.

And bit by bit, piece by piece, I put myself back together again. Not the same. Never the same. I'm different. But then, I always have been.

Almost every year, I re-read my favourite books. Of course, they'd all been destroyed when the house burned down, so I went on a mission to find them again. I spent many hours trawling opshops and garage sales. It helped me heal, finding the things I loved so much. Lord Of The Rings & The Hobbit were first. Then I found The Dark Is Rising sequence! Stephen King, my fave author - I started again my collection with The Stand and then, finally The Dark Tower began its siren call in my heart and I found all the books, one after another and began to read.

I also joined several DT and SK groups on facebook and found many kindred souls - my King Ka-Tet. And after I finished the journey and began to read more linking SK books, this itch started in my mind. It nearly drove me crazy! Except I already was... But itch it did and over a period of a couple of weeks it got worse and worse and finally, I gave in and LOOKED at the picture that was in my minds eye that was causing me such annoyance. And laughed. Because there in my mind was my favourite character of all of Stephen Kings work - the little billybumbler who had stolen my heart the first time I read the (part) series decades ago. 'Oy the Billybumbler, part of the Ka-tet of the 19 and the 99. Companion to 'Ake (Jake) and the furry love of all my readings. And so I went into my fb group and I asked how people saw Oy. The similarity in vision was amazing - we all shared the same image, or close to.

I found pencils and paper... and for the first time in almost two years, I started to draw. I went to bed after midnight the first night. 2 am the following night... and in the morning of the third day, I posted my finished image to the group for the first time. And it was unanimously loved and accepted and I felt such overwhelming relief that, while my skills had atrophied in the time they were dormant, they hadn't yet died. I also felt incredibly humbled by such accolade from my King Ka-Tet. The old feelings of worthlessness started to re-emerge but I told them to fuck off.

Oy is almost complete. I have done the graphic image of my little Sir Throcken of MidWorld, but I would still like to do a full illustration of him. But I hear Jake calling me, louder and louder each day and so I must continue until the Ka-tet of the 19 and the 99 are done. 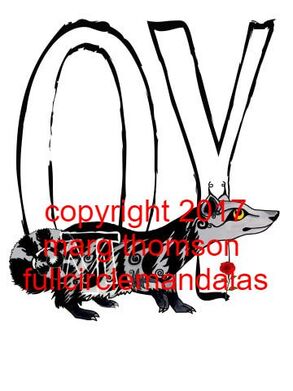